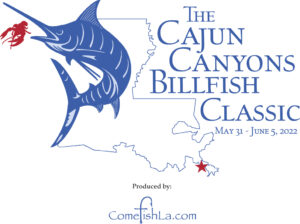 The 2022 Cajun Canyons Billfish Classic, is hosted by Cypress Cove Marina, located in Venice, Louisiana and features a modified-release format for billfish species, along with BIG prize money for Blue Marlin, Tag or Release, Dolphin, Tuna, and Wahoo; something for everybody. The tournament name originates from the deepwater canyons off the Gulf coast of Louisiana: the Mississippi Canyon (named after the mighty Mississippi River, not our neighboring state) and the Green Canyon, both home to true, world-class sportfishing. Louisiana is home to the 1st “Grander” Blue Marlin caught in the Gulf of Mexico (1018.50 lbs.), along with monster Dolphin (state record 71.25 lbs.), 200 pound-plus Yellowfin Tuna (state record 240.19 lbs.), and 100 pound-plus Wahoo (state record 139.25 lbs.).

The Cajun Canyons Billfish Classic is the second leg of the Gulf Coast Triple Crown and also a qualifying event for both the Offshore World Championship and the InTheBite Captain of the Year Cup.

Join our mailing list to receive the latest news and updates from the tournament. Your privacy is important to us. We will never sell your email adddress or send you spam.

You have Successfully Subscribed!